Three investigative stories on Tuesday were awarded the EU Award for Investigative Journalism, as the best stories from Albania in 2020. 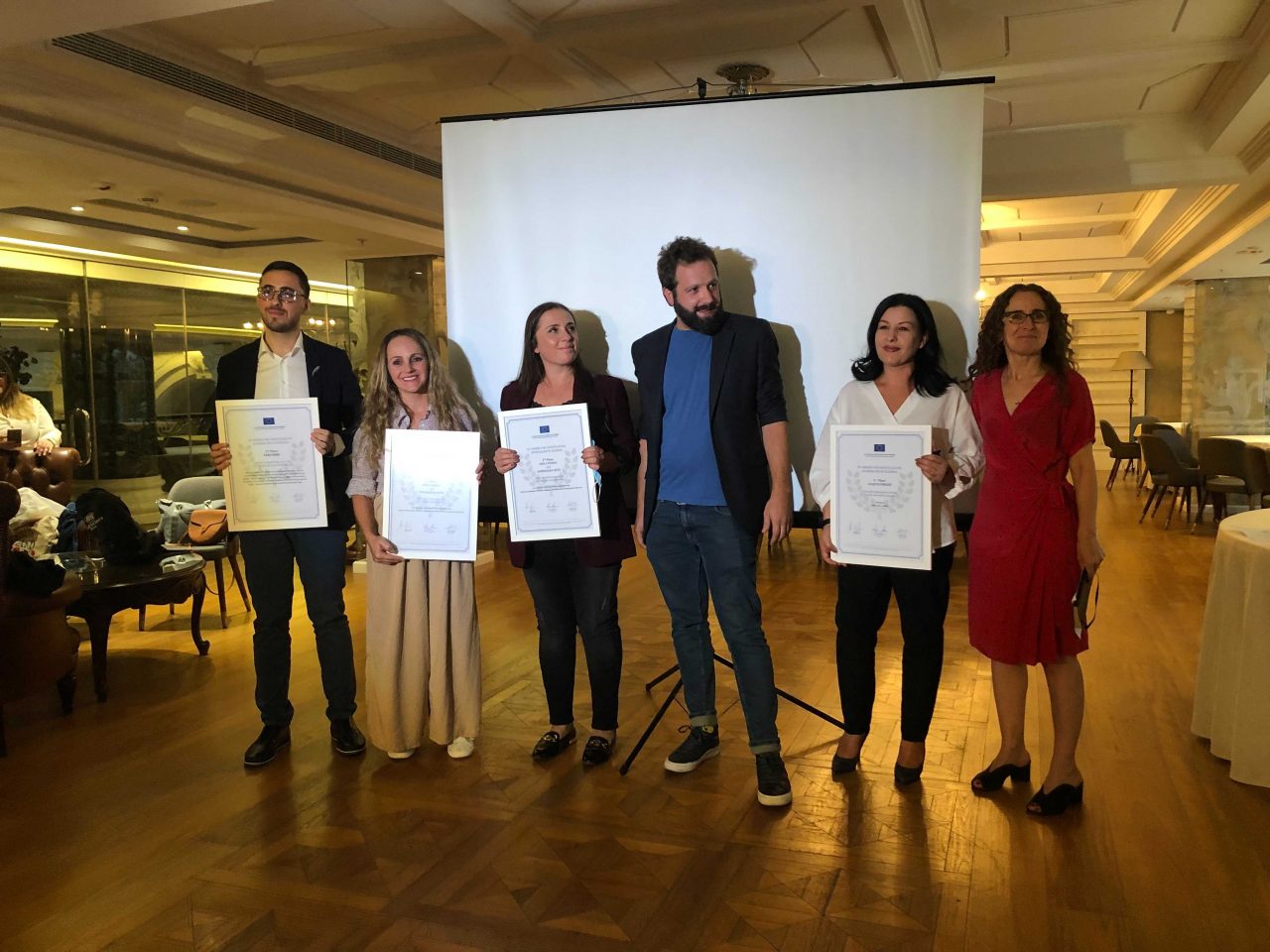 Journalists Ljuljeta Progni, Geri Emiri, Anila Hoxha and Esmeralda Keta were selected from many colleagues as this year’s winners for their stories about abuse of workers’ rights in Albania, corruption in construction and wrongdoings behind the curtain of the pandemic.

The jury, consisting of jury head Albana Kasapi, a renowned journalist and BBC producer, Idro Seferi, a Deutsche Welle and Swiss TV correspondent, and Elira Canga, a journalist working in media development, had a hard task in choosing the three top stories.

Opening the ceremony, the director of BIRN Hub, Marija Ristic, stressed the importance of awards like this in recognizing journalists who work hard to deliver pieces of real public importance.

The head of the Political Section of the European Union Delegation in Albania, Alexis Hupin, spoke about investigative journalism as a mechanism to challenge governments and authority and make them more transparent and accountable.

Hupin, head of jury Kasapi, and jury member Seferi then presented the awards to the winners.

The first prize went to Luljeta Progni for her video, “Oil Slaves”, which focuses on the human stories of Albanian oil workers fighting for their rights and professional status.

The feature-length video investigation captures the human dimension of this struggle, which is often sidelined in the local media, drawing attention to the phenomenon through backstories and the narrative of protagonists.

“Oil Slaves” covers hunger strikes, protests and struggles of Albanian oil workers for unpaid wages and benefits and the mismanagement of the industry by the Albanian authorities through shady privatizations, which eventually led to its collapse. The report is based on interviews with workers and representatives of unions in the oil industry.

Geri Emiri took second prize for a Story of Exceptional Quality for a series of investigative stories into the 2019 earthquake in Albania and the shoddy conductions of buildings in the port of Durres, which brought about their collapse and left many victims.

The stories have a public-interest angle and include a thorough investigation done though human sources and documents, interviews and other investigative techniques into the causes behind the collapse of so many building during the quake.

The first story in the series, “Albanian Quake Probe Hones in on Sub-Standard Concrete”, reveals that below-strength concrete was used in a number of buildings that collapsed in Durres during the earthquake and killed 23 people.

The second, “Durres Leaning Towers; Residents Face off with Developers Over Construction Quality”, reveals that many apartment towers damaged in the 2019 Durres quake had substandard construction work.

The third story, “Albania’s War on ‘Fear Mongers’ Leaves Rights Activists Uneasy”, brings insight into the story of the Albanian police who investigated journalists and citizens for allegedly “spreading panic” after the quake and in the coronavirus pandemic, with a chilling effect on media and freedom of speech.

The fourth piece,”Cacophony of Structural Tests Leaves People Made Homeless by Quake in Limbo”, investigates the conflict between the residents of buildings damaged by the quake in Durres and Construction Institute and its evaluation of the severity of damages.

Finally, “Structural Interventions Turned Flats Into Death Traps” , reveals how illegal construction led to the collapse of several buddings in Durres during the quake.

Journalists Anila Hoxha and Esmeralda Keta won third prize for their story:  “Albanian Govt Accused of Manipulating Pandemic Aid Data”, a thorough investigation into the support given to poor families in the pandemic and the response of the state administration in this field.

The investigation was the result of a professional, fact-based effort by the two journalists to shed light on the phenomenon of aid abuse. Their investigation revealed that although Albania’s government took credit for putting food on the tables of hundreds of thousands of vulnerable people during the COVID-19 pandemic, the figures it touted do not tell the whole story.